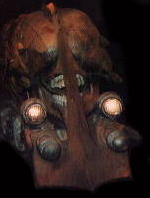 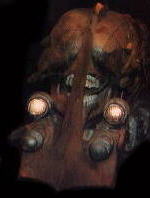 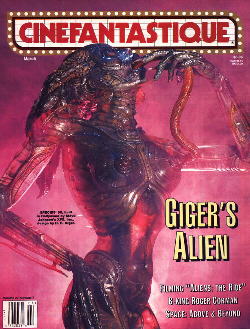 The following text and pictures are from a Movie Magazin
called "CINEFANTASTIQUE" Volume 27, Number 7

Constructing and filming the dream you never saw!

Giger had long wanted to build his Ghost Train, an idea dating back to his childhood, borne from a fascination with trains. It later became a recurring theme in his artwork. He tried incorporating it into former ahorted film projects, such as the Alejandro Jodorowsky version of DUNE and Ridley Scott's THE TRAIN. In fact, the locomotive skulls on the SPECIES train bear a resemblance to the 1976 painting he made for DUNE. Giger thought SPECIES a natural fulfillment of his dream, as it could allow him to realize, in a working 3-dimensional form, a lifelong passion. 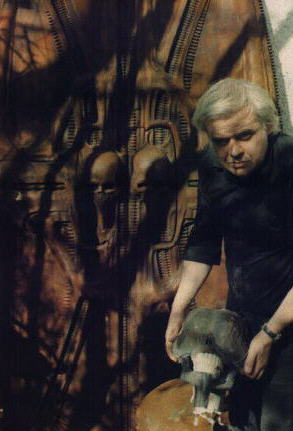 The scene written by Giger called for the train to rumble in caterpillar-like, with each section moving independently and connected by accordion bellows. Vacuum cleaner arms extend and suck up younger versions of Sil who try to run from it.

That was entirely my idea, said Giger. The script had nothing about the train or a 'Ghost Train' nightmare. Years ago, I worked on several train concepts with Ridley Scott. When I saw in the script of SPECIES that the liftie Sil escapes on the train and has strange nightmares, I had the idea I could work my Ghost Train into her dreams. They had not planned money for it in the budget, but they promised to consider it. I was so fascinated that I started with train ideas right away. Mancuso said, 'Be careful,' but I told him I will do this train anyway.

The first version of the train, which we made out of normal skulls, was not so good.

Then Cony de Fries visited me and saw in the garden one of my older sculptures, a biomechanoid head without eyes, one I made about 20 years ago. He suggested that we use this head but with bigger teeth. I could see this could work much better. Cony and I started on the locomotive skull together, and it was completed by Andy Schedler ofAtelier Formart, who built with me the other cars. The wheels and motors were made by Ball und Sohn, Modellbau, of Stein am Rhein, the finest model train manufacturer in the world. They make trains in all sizes.

In the beginning, I wanted the train to function like a caterpillar, with an accordion-like structure between the cars, but that idea didn't work out well.

Atelier Kasper Wolfensberger Egmatingen motorized and activated the vacuum cleaners, installed the lights in the train and wired it for radio control. With another company, Atelier Steel and Dreams, I built the structure of the tram station, the waiting platform and the two tunnels. Then Tanya Wolfensberger and I worked together on dressing the station with all the detailing. Everything in the station was planned and designed carefully for function. On the platform there was no way to escape from the vacuum cleaners.

I'm very happy with the train we did. If there was more time, we could have also made the vacuum cleaners function perfectly. I thought Boss Films could fix it easy in L.A. With only the help of the companies here in Zurich, a terrific Ghost Train was built, proving that we can make not only cuckoo clocks in Switzerland. It cost me a lot of my own money, but many of the rights still belong to me after the film. 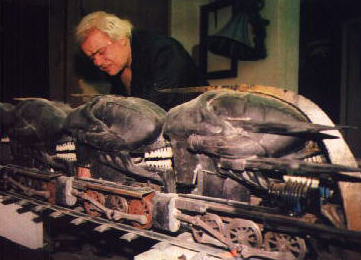 When Giger first proposed the train scene to MGM it was rejected on the basis that the sequence was going to cost $600.000 to execute it in the computer. They wouldn't consider it could be done any other way. So Giger went ahead and started building it himself. When MGM realized he was doing it, they told him to make a small model, and Boss Film Studios, the company providing the computer effects, would digitize it into the computer. But Giger ended up constructing the large model, and initially sent only photographs, which didn't give any indication of scale.

When Mancuso finally saw a videotape and realized how large it was, he instructed Giger to keep it under $100.000 and warned him to go slow since he still had to sell MGM on the scene. Giger sank about $80.000 of his own money into building the 20-foot-long, five zoll, fully working model, whose teeth, vacuum hoses and tongues all functioned by way of rotating cams attached to the wheels. This did not include any salary for his time, which he assumed would be forthcoming. Giger felt he had to go through these unusual steps to show them that his nightmare sequence was indeed possible to achieve without CGI.

Once Giger had the train to his satisfaction, he realized he needed a station to execute the sequence properly. He spent another $20,000 to construct the station, still keeping the total cost within the range Mancuso suggested. Giger was certain his scene would be accepted and become one of the highlights of the film. He believed viewers would come over and over again just to see this scene, and the train would ultimately pay for itself.

However naive this sounds, the Giger-conceived nightmare sequence did not appear in the final cut, nor did it even materialize in test versions of the special effects. When the production balked at the cost, Giger's people began looking for other options. They contacted several effects companies, such as Chandler Group and Industrial Light & Magic, to see if they could save the sequence. Chandler quoted a figure of $100.000 but this did not include any blue-screen digital compositing.

The sequence eventually wound up back at Boss, and visual effects supervisor Richard Edlund elected to shoot the train as a high-speed miniature, sans motion-control. When Boss shot the test, they filmed it without the vacuum cleaner effect and without the station. Giger had made very clear storyboards of how the 30-second sequence should be filmed in one shot. But the vacuum cleaners weren't working to Giger 's satisfaction when he sent the train from Switzerland. They weren't dropping far enough to the platform and were moving too fast and unsteady. Also, the jaws of the locomotive were opening and closing too fast. Giger felt that with all the technical know-how at Boss, all of it could be corrected. He sent faxes to Edlund explaining how the timing of the vacuums were based on how fast the wheels turned. He suggested this could be slowed down by creating a different cicumference on the size of the cam.

Giger had hoped that work would be done on the train before the test was shot. After he received the test he realized that no work at all had been done on it, and that it had been filmed exactly the way he had sent it.

Obviously, MGM was not interested in the sequence as he had envisioned it originally.

Giger's most amazing film effort rated only eight seconds of screen time, and no main title credit for the design of the train. In a behind-the-scenes promo film, more time is devoted to the making of the train than is the actual length of the scene or scenes. However fleeting its appearance, Giger's train still manages to make its jarring presence felt. It tears across the screen without explanation and, unlike the other nightmare shots, it is never referred to again.

Said Barany: Soon our fears were confirmed. The sequence as Giger had designed it was not going to be in the film. Some hard choices had to be made, quickly. Mancuso early on told Giger over the phone to keep it under $100,000 in expenses, and of course he also thought he was going to be paid besides! But even if he misunderstood, if what was really meant was $100,000 in total, it changed once the train was delivered. We were told $50,000. That's all we have.. are you in or out?

At first I advised him against it. I said to Giger, if they're not going to use the whole sequence, let's keep the idea intact and save it for a future project. Since the train wasn't in the original screenplay and no contract existed for it, it was clear Giger maintained copyright. Giger said no, he didn't want to take the chance that it may never be seen. The most important thing was that it be in the film. He said, 'It will give it life.' He was also down a lot of money and at least be could get half of his investment back.

Giger took a $50,000 loss on the train. MGM agreed to limit the ways the train could be used in merchandising. Giger retains all three-dimensional merchandising rights to the train because he was not properly reimbursed by MGM. The studio owns 2-D merchandising rights, but only exactly as the train is used in the film. They cannot, for example, in comic books, show the complete sequence as Giger designed it, or expand further upon it. MGM owns the copyright only on the 8-second sequence. Giger keeps the copyright to the train itself. The contract also allows him the right to use the train in any other future film. This unusual concession on the studio's part was granted only because the artist was not compensated entirely for his creation.

Noted Barany, Giger had the simple idea that the train could be like any living actor, free to appear in a variety of films, sometimes for a large fee, sometimes for less. Sometimes in a big role, sometimes a small one. As the train appears in SPECIES, I would rate it an uncredited cameo, perhaps as a coming attraction for a larger role in a future film. 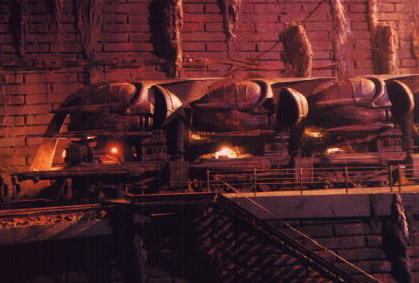 If the studio recoups enough money to make a sequel, as the ending with the mutated rat leads us to believe that they may want to, they will have to get back to Giger and talk new numbers if they would like the train to make a scheduled stop. MGM will first have to reimburse Giger for the $50,000 he is still out of pocket on his expenses, plus a respectable fee for designing it for the original film, before Giger will be willing to talk. Giger assumes that if the final tally of profits should deem a sequel worthwhile, clearing the books on the first film should not be a problem for the producers and the studio, plus they will be in a better position to pay him an additional fee for the use of the train in a sequel. For now, future film rights remain with Giger.

Although the film is long done, Giger continues to explore his fascination with trains, now as part of his fine art, and is currently building a different, much larger 7-1/4 zoll train which rolls through his house, out into the backyard and over a bridge above the swimming pool.(It is actually a black lagoon; no one has swum in it for 20 years, save for a few creatures.)